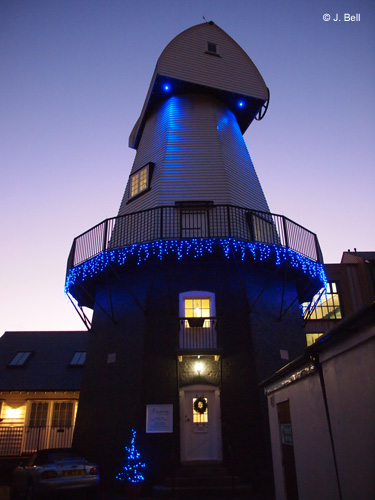 Work first started on this mill in 1811 for George and Elizabeth Jackson, but because of the swampy nature of the ground, the foundations had to be very deep – the expense of which proved too much for the Jacksons – resulting in work stopping due to a lack of funds.

The uncompleted structure stood about 22 feet above the ground for 2 years, until it was bought by Thomas Webb (owner of the Little Mill in Sheerness), who financed its completion.

The millwright James Humphrey of Cranbrook, finished the white smock mill in 1813. The design was based on the Union Mill at Cranbrook which he had also built, apart from being marginally shorter. Both mills had virtually identical machinery.

Mr. Webb, and later his son, owned the mill for a great many years. The son lived to a great age (being 95 years old in 1887, at which time he granted a lease to the miller).

From February 1865 to demolition in the autumn of 1924, the mill was held by Messers. G. Ride & Son as tenants, and later as lease-holders.

Unlike most mills in Kent at the time it didn’t have a fantail. It worked 3 pairs of stones, a dressing machine, a smutter and bolter. Steam was added in 1889, and two extra pairs of stones on the second or loading floor of the mill, as well as steel rolling mills.

After 1890, flour was no longer made. In 1905, the sweeps & stage were removed and the mill worked by steam power until the autumn of 1918, standing idle for a few years. However, as it had become very weak, to avoid collapse, it was pulled down, in 1924, apart from the brick base.

In 1989, Caleb and Bernie Watson purchased the remaining base. In 2006, plans were submitted to rebuild a similar mill. Unfortunately, in Jan 2008 a fire partially destroyed the almost completed new mill, however, the rebuilt mill was finally opened in December 2010, and remains a prominent Sheerness landmark.