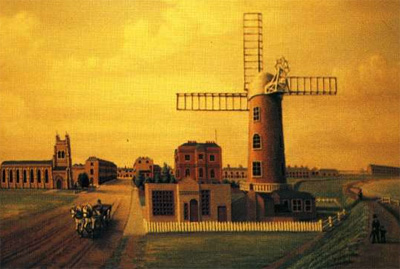 A section from a painting by Harold Batzer in 1836, showing what the Hundred Acre Windmill looked like.

The base of this windmill still remains, and can be seen within the new ‘Windmill Court’ apartment development next to the Catholic Church in Sheerness. This mill was in use until 1878.

The mill was built for a Mr. Venable. There were four stories and two pairs of stones were used. No auxilary power was used. The miller in 1872 was Mr. Adams, previously Henry Ride; both millers hired it from owner George McKee.

Apparently, Mr. Ride painted it in about 1860, but was asked by Mr. Mckee for an increase of rent of £10 a year – Mr Ride’s reply was to hand the key back and suggest Mr. Mckee find another tenant!

Mr. Mckee worked the mill on his own for a while, before employing a miller named Howe.

The name of this mill probably derives from the fact it was built on a piece of land called ‘Mr. Chalk’s hundred acre field’, which was later bought by Edward Banks who built Edward Street on it (now the Broadway).

The base of the 100 Acre windmill has been retained and lends its name to the the new 'Windmill Court' development, which replaced the Seaview Hotel. Jan 2010.