The Adolphe and Laura

Adolphe & Laura was a ship purchased by the Sheerness Co-operative Society in 1882 for the purpose of transporting coal to the Cheyney Rock Coal Depot. 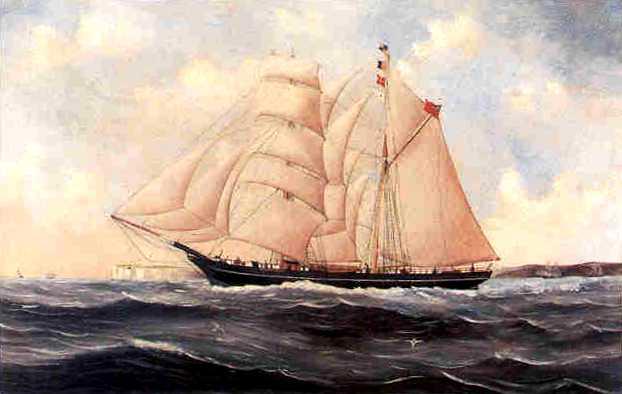 An oil on canvas painting of the brigantine Adolphe & Laura flying red ensign and signal flags (‘LKRC’ which identify her) off Dover in 1887 by TA Taunen.(Image souce: Northeast Auctions/Ronald Bourgeault) 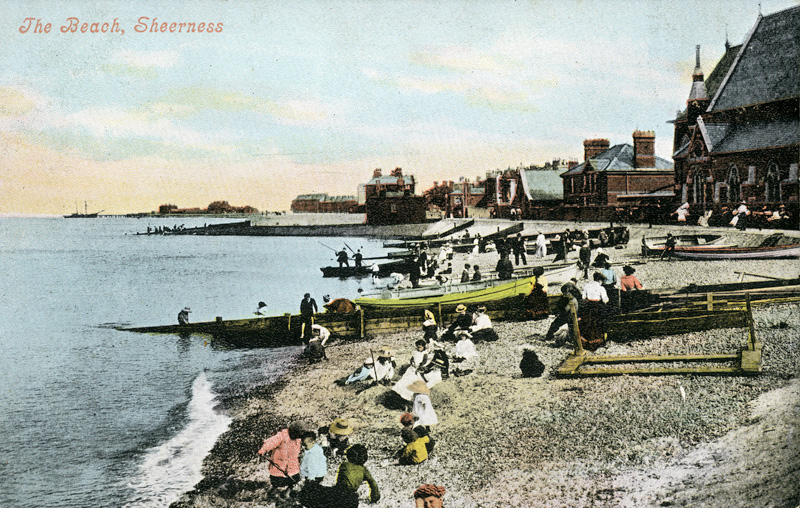 1867: A wooden brig of 174 tons built by Ordranean of Nantes, France as the “Charles Emma“.
1869: February, 19th, the Edinburgh Gazette reported: ‘Notice is hereby given that the French brig Charles Emma now lies sunk in four fathoms at low water springs, about three quarters of a cable S.S.W. from the white (and west) buoy of the narrows of Falmouth harbour‘. [the ship is assumed to have been refloated, repaired & renamed after this]
1870: Sold by owners Beckmann and Company, London to G. R. Burnett, London
1872: Bought by J. C. Hoad  of Rye. Used for trading to South America.
1882: Purchased by the Sheerness Co-operative Society for £650 and adapted for the transport of coal. Alterations made at a cost of £300 16s 1d, including converting the rig from a brig to a brigantine. Able to carry about 240 tons of cargo, she made 178 voyages up to 1899. The first voyage involved a collision, and the claim for damages was met by the owner of the colliding vessel.
1892: On 6th April, the vessel was provisionally detained by the Board of Trade at North Shields for overloading, but due to extenuating cirumstances only a fine of £3 and costs were imposed.

1897: On 29th November, there was a disastrous gale and flood at Sheerness: “The Adolphe & Laura was lying at moorings at Cheyney Rock pier, when by reason of the gale, the north-western mooring chain parted, and the vessel’s port quarter set on the third pile from the end, putting a hole through the stern, whereby she filled with water and sank, the sea swept the deck, and the crew lost their belongings.” .. “Tenders were invited from local shipbuilders to make good the damage to the vessel; no time was lost in clearing the cargo, pumping out the water, and raising her, which difficult task was completed in about one week, and the ship rendered navigable to Whitstable, where she was repaired and made ready for sea by the Whitstable Shipping Company, at a cost of £278.”
1907: Purchased by William Thomas, Amlwch Port from William Lowery of Hull for the sum of £295. Re-rigged as a brig.
1909/10: Broken up

Other notes about this vessel:

She was described in the old Custom House Register as a “lute-sterned vessel”, with a female bust figurehead.

“Running her close as regards size was another wooden brig, the Adolphe and Laura, 174 tons, which was built by Ordrane of Nantes, France, in 1867, as the Charles Emma.  She was sold in 1870 by her owners, Beckmann and Company, London, to G. R. Burnett, also of London. Burnett did not keep her long, selling her in 1872 to J. C. Hoad  of Rye, under whose ownership she traded to South America for a number of years. However, in 1882 she passed into the hands of Sheerness Co-operative Company and was employed for a number of years after that in carrying coal to Sheerness, until in 1908 she was sold to a Mr. Thomas. The end came a year or so later, when she was condemned and broken up. Soon after the Co-operative Society bought her, her rig was cut down to that of a brigantine, but in 1908, or perhaps before that, she was re-rigged as a brig.”